skip to main | skip to sidebar

Just a quick update on what I've been up to.
I received thirty-four new little peepers that arrived last week. Of course I've already got a favorite. She runs up and jumps in my hand every single time I see them.
This shot is the day they arrived. Their wing feathers have already grown in since then and they are a bit larger now. 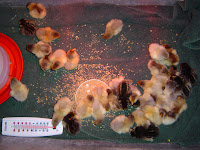 I bought them from Dunlap Hatchery in Caldwell. http://www.dunlaphatchery.net/
Not only did they ship a day early, but they sent ten extras, making a total of sixty-six. Five, unfortunately, didn't make it. After splitting the order with a friend of mine, I ended up with twenty-eight bantams and six standard size.
I also ordered two 4 frame nucs of honey bee's from a guy in Fruitland. I'll pick them up on the 11th of April and weather permitting he'll be doing some demonstrations. Although we had bee's when I was a kid, I have never actually owned any or worked with any, so any chance to soak up some information is appreciated.
I'm actually really excited about working with the bee's. My dad still has all of his equipment that I'll be able to use, so there isn't much of an expense. I didn't really plan on trying for a few years. But like I mentioned before, a good friend fixed up the old hives and gave them to me for Christmas, so it was a nice kick in the butt to go ahead and try it.
I think that I am going to start one hive with these traditional boxes of my dad's and then try one in a top bar hive as well. I'm drawn to the top bar hives for some reason, although they produce a little less honey and more wax. I guess I'll just be making more candles. Notice the board on the side for an observation window. 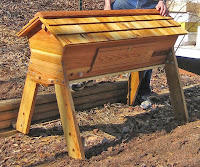 And here is a drawing of a Greek top bar hive described in 1682. 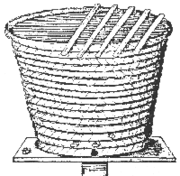 Not only do I want to keep these bee's for the honey and wax, but also for the improved productivity in our garden and orchard. Not to mention the excitement and challenge of it all.
I'll definitely keep everyone posted on how this little endeavor works out.